“It’s important that we work hard to incorporate flexible working into our recruitment process”. Samantha Scarfe, HR Manager at AMG Superalloys speaks to us about challenges facing the sector.

As part of our commitment to supporting candidates to develop fulfilling careers, we’ve invited some HR Leaders to share the secrets of their success.

This week, we had a great conversation with Samantha Scarfe, HR Manager at AMG Superalloys. Samantha joined AMG or London and Scandinavian as it was then in 2002 and became Executive Assistant to the Directors and also supported the then HR Manager with administrative support. From there she developed a love of the role and has now been leading the HR team for over 5 years.

Can you tell us how you got into HR?

I joined AMG or what was then London Scandinavian in 2002 as an operations secretary. I worked my way through the ranks and ended up being an executive assistant to the then managing director. That was around 2008 and at that time I was also looking after the HR administration too.

I found that as I was developing in that role, I was quite inquisitive and was doing things on my own initiative. It was at that point I realised that what I knew was self-taught.  I’d not had any kind of official training, so went on a few training courses for HR Admin and the basics of employment law. I gained some kind of grounding and thought, I quite like this.

It was at that point that I wanted to do something more official, so I spoke to the HR manager and asked to be put through my CIPD. I went to college on day release while juggling a full time role, which was a challenge, but I enjoyed it.

In 2013, we had quite a major reorganization at the business. When our current MD said, I want you to do this role full time, you’ve got the potential to do it, we’ll continue with your studies and support you. Since then I’ve grown quite a large team. Where previously I was standalone HR, I’ve now got a team of 4 across HR, L&D and payroll.

What key themes and challenges in HR are you seeing at the moment?

At the moment, some of the things that we are focusing on include mental health and wellbeing. We really want to focus on the wellbeing strategy and making sure that people are as fit and well as possible.

We’re planning  on training a number of employees as mental health firstaiders to support and focus on mental health wellbeing. We have wellbeing campaigns every month and we’ve even started to put signs up on the backs of toilet doors to remind employees what their health benefits are and how to access them.

Flexible working is quite a big issue across the sector. It’s important that we work hard to incorporate that into our recruitment process. The difficulty is often in changing manager’s mindsets from, ‘I want somebody full time Monday through Friday and working nine to five’ to considering flexible working. We want to try and engage with the talent that’s out there and not restrict ourselves.

We work quite closely with the hiring managers to challenge their thinking to consider part time working or different shift patterns to accommodate potential employees.

Finally, the war for talent is high on my agenda. Everyone wants the best. So, we’re looking at emerging talent, we’ve created our own operations graduate scheme. We introduced that back in 2018. We looked for two people and we ended up with four and we have a further programme again this year. The plan is to build on that and focus on growing our own.

What advice would you give to someone that wanted to build a solid HR career?

It’s important to get that good grounding and have a generalist role first. Because I think once you’ve got that then a specialist role can follow. Being able to understand the recruitment process and sickness absence is important. Understanding the whole HR cycle is a good grounding for that. The CIPD qualification is generally what employers ask for rather than an experience sometimes. Networking is also important because if you’ve got a network of people that live in the same boat as you, you can support each other. So, if you want to implement a holiday buy system for example there’s likely to be somebody in your network that’s got a policy and wouldn’t mind sharing it with you.

Finally, being resilient is key. Resilience plays a big  part because sometimes everyone comes to you with their problems thinking that you’re going to solve it for them.. Sometimes it’s tough particularly, if you’re going through restructuring and redundancy processes. There’s sometimes a need to have the hard conversations that sometimes managers aren’t that comfortable with.

Samantha has worked at AMG Superalloys for over 17 years and leads the HR function.

If you are interested in having a confidential conversation about your career or would like support growing your team, please get in touch with us today. 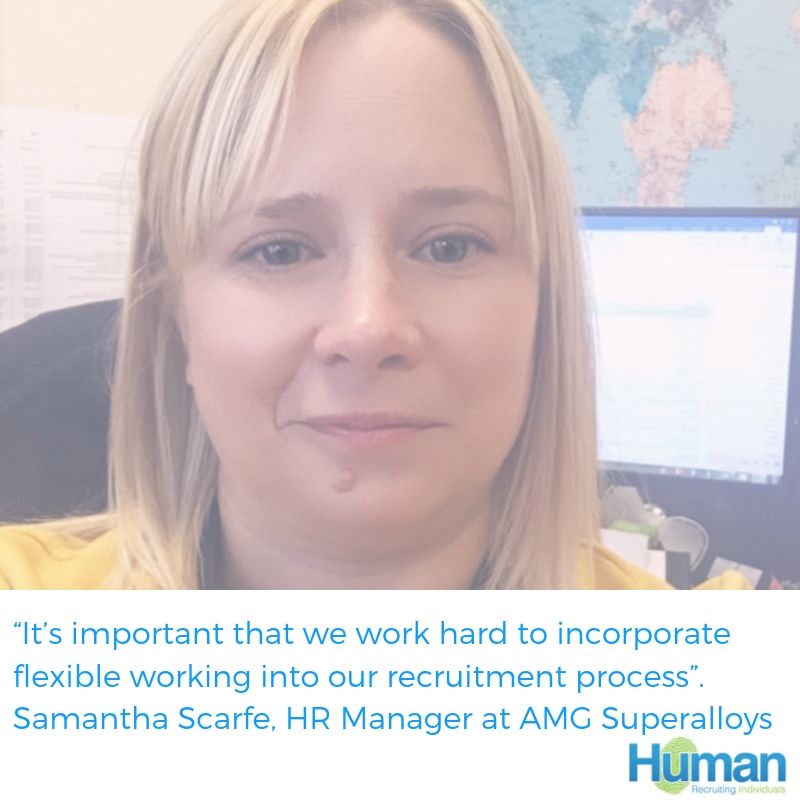