HR leadership with Martin Blackburn, UK People Director at KPMG. Martin talks to us about HR, his career trajectory and how Cilla Black helped him get his start in the HR arena.

As part of our commitment to supporting candidates to develop fulfilling careers, we’ve invited HR Leaders across the UK to share the secrets of their success.

This week, we had a great conversation with Martin Blackburn, UK People Director at KPMG. Martin’s career in HR began in Graduate Recruitment for Ernst & Young. From there he developed a career within Professional Services with Proctor and Gamble, Baker & Mackenzie before joining KPMG in 2014. I asked Martin how he got started in HR and his answer did not disappoint.

Were you always interested in an HR career from the start?

“Do you remember Blind Date, Amy?” I answered ‘yes’ tentatively.

You might remember that there was a widely reported wedding, Cilla wore a big hat. It was big news at the time. The groom was Alex Tatham. He was an auditor at Ernst & Young. They recognised that he had a lot of profile, everyone knew who he was. They sent him on a 12-month secondment to visit all the universities at Freshers Fairs to represent the company and promote their graduate scheme.

Alex did that for a year then went back into audit practice. I’d done really well in my accountancy exams and came top in the country, there was lots of profile around that and EY asked me to take over Alex’s role. I spent 12 months going around all the universities speaking to students about a career at Ernst & Young. I enjoyed it, but eventually went back to audit with EY before leaving for a career in Finance with Proctor and Gamble. After a year in Finance, I realised I missed Graduate Recruitment, so I returned to Ernst and Young.

“People is really the reason HR stuck. I had a brilliant experience at Ernst & Young, running business games and doing presentations. It can be naive to sometimes to say that HR is helping people, but I enjoyed helping people.

After 14 years with EY I left in 2007 to become HR Director for the London office of Baker & Mackenzie.

For Martin there are two things that really drive his enjoyment; who he’s working with, and what he’s trying to achieve. At that time, the Legal arena was changing and was relatively untouched by modern day HR.  Martin believes that around this time, the legal sector had a realisation that they were fundamentally a people business. He worked with the Managing Partner to transform the organisation. The business was operating in a very volatile market when he joined in 2007, just before the financial crash. We couldn’t recruit fast enough, and 1 year on we were managing redundancies. When I left Baker & Mackenzie I hadn’t intended a return to the Big 4, but they had really changed. Some of the leading edge thinking was coming from the big four.

What key themes and challenges are you seeing in the HR sector at the moment?

The changing nature of HR is a key topic. The type of things we’re doing now weren’t conceived of in HR previously. ‘Is Culture aligned to Strategy?’ That wasn’t discussed 10 years ago. Back then they talked about values but if we don’t have an aligned structure and values, you won’t achieve.

Obviously, Brexit is on people’s minds. Aside from that, technology has made a huge impact and is changing at a very rapid pace. We just rolled out the first module of SuccessFactors, which is Employee Central, at KPMG. Two or three years ago, we were thinking about moving to a cloud-based system globally. But we’re realising how much the world of work has changed. You have to move quickly and implement shorter term projects that are more flexible and can quickly plug in to your existing system.

Being able to use data and analytics for forecasting HR needs is another challenging area that we have to quickly adapt to.

We’re also seeing that the workforce of the future is transforming into a more contingent one. You often have people from five to six generations co-existing in the same workplace. People want more control over their career and have individual experiences. They don’t expect to be told stuff. They get what they want and move on.  We’re also seeing more and more that the next generation, generation Z, are very tech savvy and are used to instantaneous feedback. Organisations like KPMG are more relationship driven. Some people believe, we’re creating a generation that doesn’t have as strong relationship building skills. The question we need to ask is “Will that matter to our clients who might be expecting something different?”

What career advice would you give to someone who is starting their career who wants to follow in your footsteps?

HR is such a wide area and it’s getting wider. Therefore, it’s important to get experience of different areas. I find it amazing how still today I call on skills I learned during my time in graduate recruitment back at the start of my career.

Other advice I would offer is to remember that HR isn’t an industry; it’s there to support business to achieve its strategy and to understand what’s getting in the way. If you don’t have that natural interest you’ve constrained yourself. Initiatives that are just pushed onto the business often don’t work. If you just shove stuff into it a business that it doesn’t want, it will reject it.

The final piece of advice would be to get a range of experience. When I started HR was HR and Recruitment since then there has been a massive proliferation into health & wellbeing, engagement, culture. You could choose to specialise but early in your career I believe it’s good to get as much exposure as you can.

Martin has been UK People Director for KPMG since 2014 and leads a team of over 300 people across 22 offices.

If you would like to have a confidential conversation about your career or would like to understand how Human can support you in growing your team, please get in touch today. 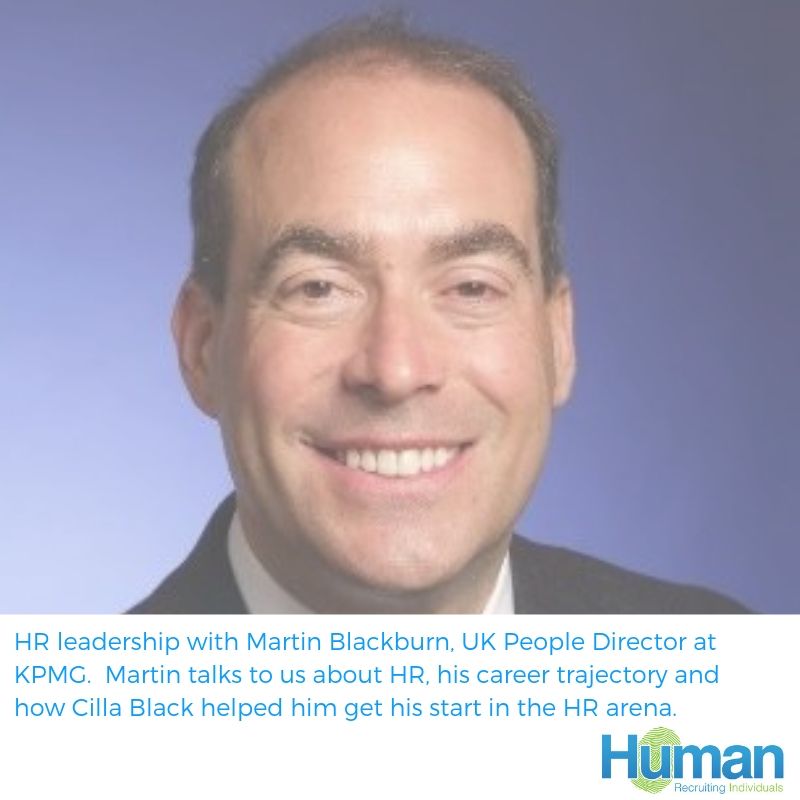