“…we have a sign on the wall which reads ‘HR’ with a big red cross through it”. Katrina Ritchie speaks to us about People and Culture at Gripple and why the phrase HR has been banned.

As part of our commitment to supporting candidates to develop fulfilling careers, we’ve invited some HR Leaders to share the secrets of their success.

This week, we had a great conversation with Katrina Ritchie, Head of People & Culture at Gripple. Katrina leads a global team of 9 and has been with the business since 2000.

How did you start your career in HR?

My career in HR began with Gripple. Gripple is an employee owned business and absolutely fantastic. I just felt passionately about the people in the company. I’d been in internal sales for 13 years, but I felt like I’d reached the peak of my Sales career. I wanted to do something different and was also ambitious.

At the same time there was an opportunity in L&D (we didn’t have a HR department). I didn’t know anything about L&D or HR but thought I do know about people and have an inherent understanding of our culture and values. Soon after joining as a coordinator I suggested re-naming the team of two to People and Culture. That was six years ago now I lead a team of nine globally and have a seat on the Exec Board.

The word ‘Human Resources’ is banned, we have a sign on the wall which reads ‘HR’ with a big red cross through it.

What key skills do you think are important for an HR leader in 2019?

It’s important to be able to influence, listen, enable others and take ownership of the people agenda. In the beginning that wasn’t very easy, managers had their own agenda.

For example, I wanted to improve our appraisal process to reflect our unique culture. We were talking about ‘Gripple People’ and our values, but we had never clearly defined what a Gripple person looks like, how they behave and what do they do. I approached the Chief Exec at the time and said, ‘I’ve got this idea, I think we should be appraising people based on values and behaviours, if people have these then we can train them to do anything’, we call it the ‘Gripple Spirit’. His endorsement made it easier to implement. We also recruit against the Gripple Spirit and manage performance.

Do you think your background in Sales has attributed to your success in HR?

I think so because a large part of the role is engaging with people and stakeholder management; it’s influencing. For me good HR is led by common sense, it’s about doing the right thing, not what’s right. We don’t want P&C to take the problems away from managers because we want our managers to be leaders, to be accountable for their people; ensuring employees are being developed, trained and looked after. In the beginning that was tough because originally, you’d get the people bypassing the manager and coming to me. But to make it work I had to push back, you have to for the integrity of what we are trying to achieve. If you’re in the weeds working operationally, you can’t get to the strategy of improving the business and performance.

What key themes and challenges are seeing the sector face at the moment?

The biggest thing that is causing me the most concern is the mental wellbeing of employees. In the last year, we’ve seen more cases than ever. I’m not sure if it’s due to more awareness and people being more open but it’s a real concern. We have introduced lots of strategies to support employees such as; chaplaincy support, a listening service and we have trained all our managers in Mental Health First Aid. All our employees have medical insurance so we are communicating this stronger as well as bringing in mobile medicals and occupational health services.  We also run events such as Well-men and Well-women sessions and invite outside agencies to speak with employees about lifestyle and general wellbeing.

What careers advice would you offer someone hoping to build a career in HR?

Get involved in your business, volunteer, put your hand up! It’s also important to set an example to others, show up for events, ‘muck in’ and learn as much as possible about people from all areas of your organisation.

Katrina has been part of the team at Gripple since 2000 and has been Head of People & Culture since January 2013.

If you are interested in having a confidential conversation about your career or would like support growing your team, please get in touch 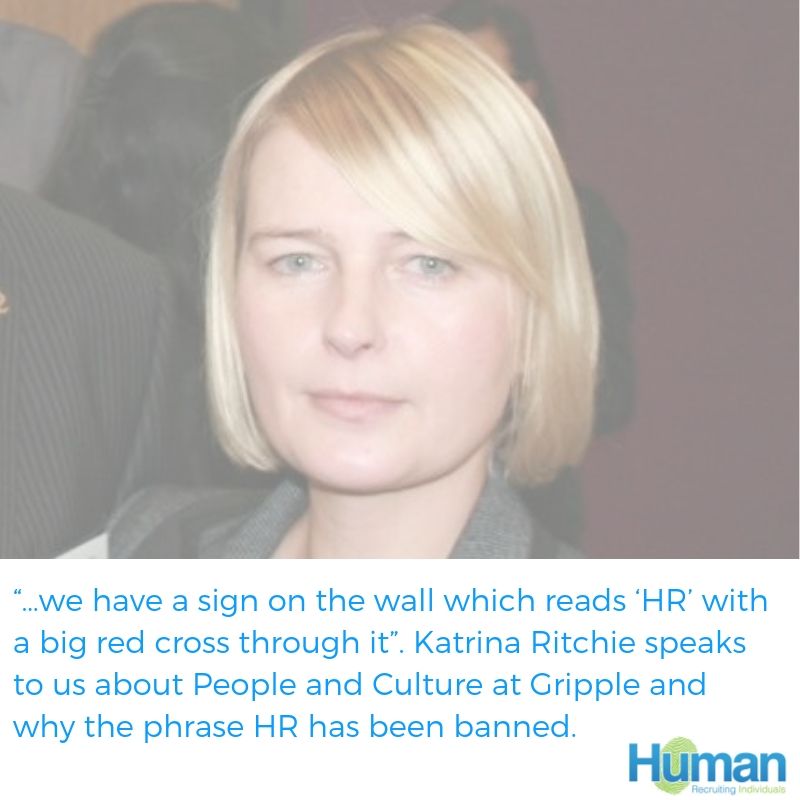