“You have to start thinking about the company almost as if it were your company”. Robert White, COO at IDC speaks to us about developing a career in Leadership.

As part of our commitment to adding value beyond the connection, we have been speaking with CEO’s, COO’s and HR leaders. We wanted to understand more about how they developed careers, the challenges they face and how they have achieved their success.

This week, we spoke with Robert White, Chief Operating Officer for Western Europe at IDC and CFO for EMEA.

How did you develop a career in Leadership?

“I will have been with IDC for 27 years in March 2019. Prior to that I’d go into a company, work for two, two and a half years maybe and then look for some sort of the promotion or upward movement”.

“In 1992 I was working for a major computer vendor. It was a French organisation and I was looking for the next step up. Like a lot of the hardware companies at that time it was just starting to hit a wall in terms of its growth and expansion. So, I thought it was a good time to have a look around. I went to some recruitment agencies and one of them came back with this opportunity at IDC”.

“As before I initially had my eye on the horizon. But I quickly realised that there was massive potential for me at IDC. Around 1997, I accepted the opportunity to take on the European finance director role. This opened up more possibilities in terms of taking on international work and managing teams distributed across western Europe. There was always something more to do. That role led on to my current role as COO, which I’ve been in for about four or five years”.

Was it easy to transition to the role of Chief Operating Officer?

“I would say it was a significant transition going from Group VP of Finance into Chief Operating Officer. I kept responsibility for finance. At the time we were going through a change and I was also given the extra responsibility for our publishing division.  The really big change came 10 years after that when I moved into my current role. It really gave me the opportunity to operate as a general manager and more than a head of the back-office support function”.

What key skills are most important to success in a Leadership role?

“Communication is definitely in the top three. When you are working with a mix of direct reports who are spread across a geography the size of western Europe, the ability to communicate is paramount.  There are different cultures, which sometimes presents a challenge, and sometimes presents opportunities. You have to recognise that people do things differently, they behave differently, they have different management styles. It’s very important as an international manager to be able to connect and communicate across those different geographies”.

“Another key element to success for me is to be able to think like an owner rather than an employee at all times. You have to think about balancing shareholder interest, employee interest, and of course the client interest.  You have to come to a decision on something that you know is optimal for the organisation whilst balancing those three important constituencies”.

Empathy was the final of the three-skills Robert said would be key to success in a Leadership role. “You have to take into consideration things like human aspects. For example, HR decisions, you have to think about how change will be received. The numbers might look good but how do you sell this to managers who might be resistant to change. That part of the equation for me was something I had to learn on the job and often by experience, occasionally through mistakes. The Human aspect to leadership is key”.

What key themes and challenges are prevalent at the moment across the Leadership function?

“In our company as time moves on there’s definitely been a change and the younger generation coming through have been the catalyst. Flexible working is a key consideration. The expectation is that people come in and do eight hours, nine to five, although we have a lot of flexibility. Over the last few years, we have operated with flexible working; people can work at home for a certain amount of days a week and can come in later if they need to. So, to that extent we flexed and moved with the times.

“If you are attracting top talent you want them to be productive. You want them to be optimal, but at the same time, switch them on to the long-term opportunities. People want to understand what their career will look like in four or five years’ time if they choose to stay. In that sense, the traditional employer employee relationship has changed. At the younger end of the scale the expectations are higher and there’s more choice out there in terms of newer companies who were often set up by people in that generational bracket”.

What career advice would you give to someone with aspirations to develop into a C suite role?

“It goes back to what I said, that you have to start thinking about the company almost as if it were your company. That’s the single best advice I would give. I’d also recommend you look at how the whole company fits together, understand the role of other support areas which often get overlooked. Who’s the sales director or sales manager? Who’s on the upward path? You can go on training courses and learn about corporate governance or HR in terms of what it means today. But I think often the best thing to do is look at the environment that you are in and understand it better”.

You’ve been with IDC for 27 years now. What is it about IDC that has retained your interest for that length of time?

“There are so many positives to a career with IDC; the geographical coverage is very exciting. It’s a very fast changing sector, even more so than it was over 25 years ago when I joined the company. Information Technology combined with mobility and communications is changing almost on a quarterly basis. So, the niche that we operate in, in terms of research in the Tech sector offers excitement.  Combined with the global coverage that we have and the ability to connect and build teams across different geographies and different continents in terms of the way that we work makes it a very exciting environment for anyone who’s got Sales, Research or Consulting skills”.

Robert has been COO and CFO for EMEA at IDC since January 2013 and reports directly into the IDC President and CEO.

If you are interested in having a confidential conversation about your career or would like support growing your team, please get in touch today. 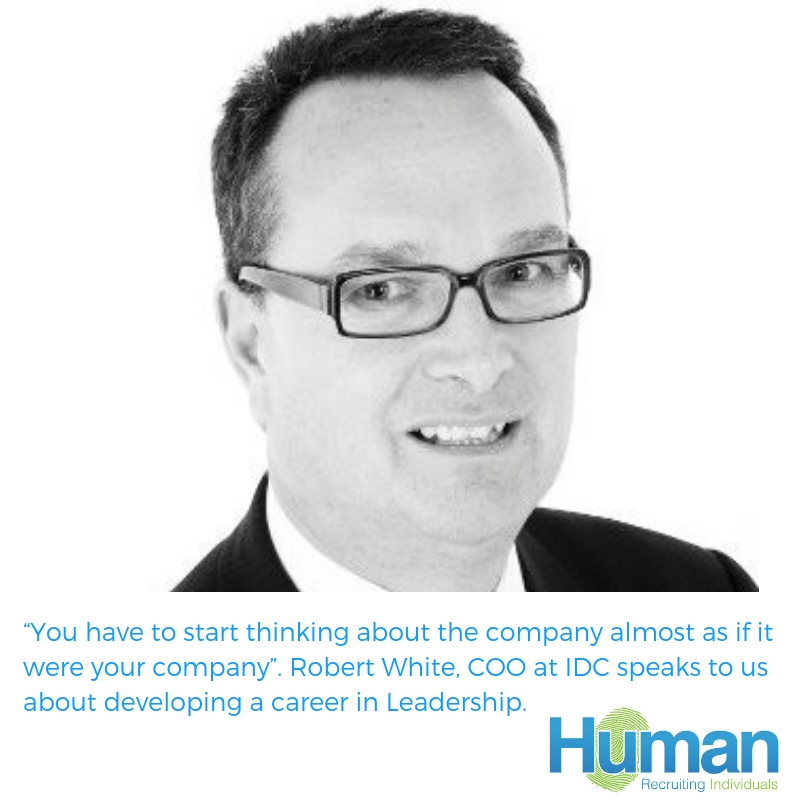